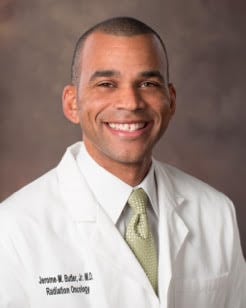 …Prostate cancer is the most commonly diagnosed cancer in men, affecting one in seven American men, and the prevalence in African-American men is 1.6 times greater than Caucasian men. Although experts do not yet understand why prostate cancer incidents are higher among African-American men, it is widely believed that a combination of genetic differences, lifestyle and nutrition habits and medical care may all play a role in the statistics.

“If detected in its early stages, prostate cancer is highly treatable, and most men go on to live normal, healthy lives after treatment and recovery,” said Dr. Jerome Butler. “Being aware of risk factors is critical to prevention and long-term health.”

Prostate cancer only affects men and is a serious health concern as men age. It occurs when some of the cells in the prostate abnormally reproduce more rapidly, resulting in a tumor. A serious risk is that most prostate cancers develop in men without any symptoms in its early stages and if left untreated, can spread to other parts of the body and produce secondary tumors. Though no test is perfect, routine annual screenings can help to detect prostate cancer early on before the disease progresses.

To prevent undetected prostate cancer, it is recommended that men should receive an annual prostate screen beginning at age 50,” Dr. Butler said. “For men at a higher risk, such as African-American men, those who have poor lifestyle habits and those with a family history of prostate cancer, screening should start as early as age 40.”

“I asked my pastor if I could share my story to the church congregation so that they can understand the importance of getting screened and taking care of their health,” Davis said. “We’re all going to get sick at some time or another, but if I can save another person through my story, I feel good about that.”

CaroMont Cancer Center provides advanced treatment therapies, as well as a multidisciplinary team, to determine the most effective analysis and treatment methods for each person. After surgery, Davis is now receiving hormone therapy treatment and external beam radiation under the care of Butler. He has 10 more treatments to go, but he’s happy to know that his cancer was identified and now being treated.

Through his surgery and current treatment, Davis said he has felt great and credits this to the excellent care from his doctors, his wife and his strong faith. After he’s done with radiation, he and his wife want to take a vacation to Hawaii, a place they have always wanted to visit. and his wife live in Gastonia…

Using Google Ads to Warn Against the Dangers of Tanning Beds