Skin Cancer 101: What is Actinic Keratosis? 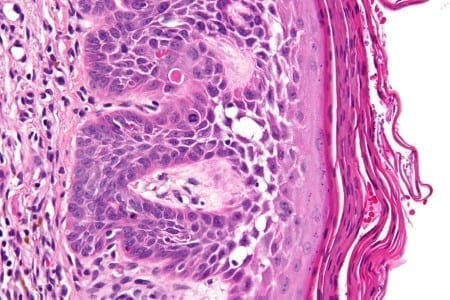 What is Actinic Keratosis?

Actinic keratosis (AK) is a rough, scaly, crusty, and/or discolored patch that grows on the skin. AKs are caused by long-term exposure to UV radiation.

Also known as solar keratosis, these small lesions/growths typically emerge on areas of the body that are frequently exposed to the sun. Some AKs become elevated and rough, taking on a wart-like texture and appearance. They grow very slowly, often taking years to develop, and do not cause any symptoms other than the formation of a small, rough lesion. The lesion is typically red, but may also present as pink, beige, or flesh-colored.

Common areas where AKs may develop:

A Precursor to Skin Cancer

While AKs themselves do not pose much danger, they may develop into skin cancer if left untreated for a long period of time. 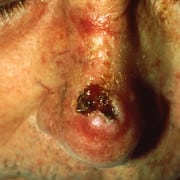 Squamous cell carcinoma is the second most common form of skin cancer. It can be dangerous if left untreated. SCCs can cause severe disfiguration, and, in the rare cases when the cancer spreads, SCC can be fatal.

Ten percent may seem like small percentage, but untreated AKs can have very serious repercussions. An estimated 40% of new SCCs began as AKs—many leading scientists consider AK as the first form of SCC. Two to 10% of SCCs spread to distant organs, which can be life threatening.

Actinic keratosis emerges as a very slow-growing patch of abnormal skin, typically in areas that are commonly exposed to the sun. The patch may have the following characteristics:

Actinic keratosis is most common in older people, although anyone may develop it. You may be at higher risk of AK if you meet the following criteria:

Actinic keratosis may go away on its own, but often comes back following sun exposure to the damaged area of skin. Depending on your personal and family history, skin tone profile, and overall health, your doctor may suggest monitoring your AK over time. If you are at high risk for skin cancer or other complications, your doctor may suggest medication, surgical removal, or photodynamic therapy to cure AK.

Medications may include topical creams or gels such as:

Photodynamic therapy refers to the topical application of medicine to the affected area that makes the cells sensitive to light. When cells are in a state of heightened light sensitivity, they will be destroyed by exposure to light.

Cryotherapy is a quick and mostly painless process, usually lasting a few minutes, in which a very cold substance such as liquid nitrogen is applied to the growth. The growth will freeze and slough off.

Cutterage refers to the scraping off of damage cells using a device called a curet. Cutterage usually requires a local anesthetic.

What is Squamous Cell Carcinoma?

How to Protect Yourself from the Sun
Scroll to top