You are here: Home1 / Skin Cancer

Skin Cancer Care in the Carolinas

Skin cancer is the most common form of cancer, with more than 9,500 people diagnosed with skin cancer every day. Yet it’s also one of the most treatable forms of cancer. With early detection and proper care, melanoma has a five-year survival rate of 99 percent.

Considering the importance of early detection, it’s crucial to understand what skin cancer is, what it looks like, and what you need to do if you suspect that you may be at risk.

How Common is Skin Cancer?

1.5 million people will be diagnosed with skin cancer this year

Over 178,000 cases of melanoma will be diagnosed in the US this year

How Does Someone Get Skin Cancer?

Cancer forms when the DNA in your skin cells become damaged. Skin cancer is the typically result of one of three causes: 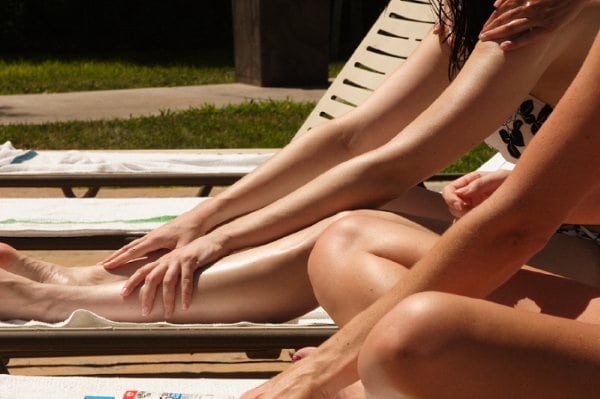 Scientists believe that exposure to ultraviolet (UV) radiation is the cause of more than 90% of skin cancer cases. UV radiation is another name for the light and heat created by the sun or indoor tanning lamps.

Exposure to the sun or tanning lamps increases the risk of all types of skin cancer. People who experience prolonged exposure to UV radiation during childhood, particularly if they experience severe sun burns, are more likely to develop melanomas and basal cell carcinomas later in life.

Warning signs of skin cancer include:

Learn more about the early signs and symptoms of skin cancer and how to tell the difference between an atypical and a precancerous mole.

Who is Most Likely to Develop Skin Cancer?

Some people are more likely to develop skin cancer than others. By collecting and studying data about the genetic characteristics, environmental influences, and lifestyle choices of skin cancer patients over many years, doctors have identified certain factors that are common among people who have developed the disease. While some of these factors have not been proven to cause skin cancer, each has a correlation with a significant number of people with skin cancer.

What are the Types of Skin Cancer, and How Are They Different? 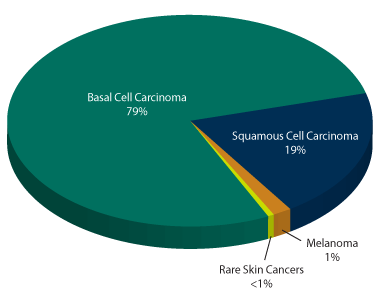 How is Skin Cancer Treated? 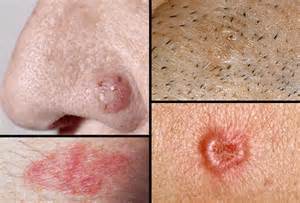 Treatment for skin cancer will depend on the type of skin cancer and the stage. Learn more about skin cancer treatment options below:

Radiation therapy for non-melanoma skin cancer is an effective alternative to surgery. This type of treatment has minimal side effects, scarring and quick healing.

Radiation therapy is considered an effective cancer treatment for most non-melanoma skin cancer, including basal cell and squamous cell cancers. Radiation therapy works by directing forms of radiation, including X-rays or electrons, onto the areas of the skin affected by cancer. This type of radiation is emitted from a machine positioned outside the body, and the radiation doesn’t penetrate beneath the skin.

According to American Cancer Society, radiation is effective enough to be considered a cure for some small basal and squamous cell skin cancers. It may be recommended as the primary type of cancer treatment in cases in which the skin cancer covers a large area or is in a hard-to-reach area that would be difficult to treat with surgery. In advanced skin cancer, radiation therapy may prevent or slow the growth of tumors, and it may be used after surgery as additional (adjuvant) treatment to kill remaining cancer cells. Radiation therapy can also be used in people who have skin cancer that’s spread to their lymph nodes or other areas of the body.

If you’re interested in radiation therapy as a method for skin cancer treatment, contact the board-certified physicians at SERO today. With cancer treatment centers in Charlotte, NC and surrounding locations, we are proud to serve individuals from across the Southeast.

Do you want to learn everything you need to know about skin cancer:  What to expect, how do you treat it, and how it will affect your life?  Download our free eBook today and get your questions answered.

Which is Worse: Basal Cell or Squamous Cell Cancer?

What is the Best Treatment for Squamous Cell Carcinoma?

What are Side Effects of Head and Neck Radiation After Five Years?

In some people, radiation therapy for skin cancer treatment can lead to long-term side effects that may persist for up to five years or more after the final treatment. These side effects may include:
- Fatigue
- Sores in the mouth and gums
- Difficulty swallowing (dysphagia)
- Dry mouth
- Nausea
- Hair loss
- Jaw stiffness and dysfunction
- Tooth decay
- Lymphedema (swollen lymph nodes, especially around the neck)

The goal of radiation therapy for skin cancer treatment is to destroy cancerous cells while sparing surrounding healthy skin tissue. However, sometimes even healthy skin can become temporarily irritated as a result of the treatment. Doctors recommend several methods for patients to take care of their skin while they are undergoing radiation therapy. These include:
- Gently wash the skin with warm water and mild soap, then gently pat dry (don’t rub).
- Avoid the use of perfumes, powders, cosmetics, tape, after-shaves, deodorants, creams, or lotions on areas of the skin receiving radiation.
- Wear loose and lightweight clothing.
- Avoid extreme hold or cold temperatures on the skin.
- Protect the skin from direct sunlight. When radiation treatment is over, patients need to use sunscreen on treated areas for the rest of their lives, as these areas will be more sensitive to the sun and more likely to burn.
- Use electric razors to carefully shave hair in the treatment area.
- Eat a nutritious diet and stay well-hydrated.