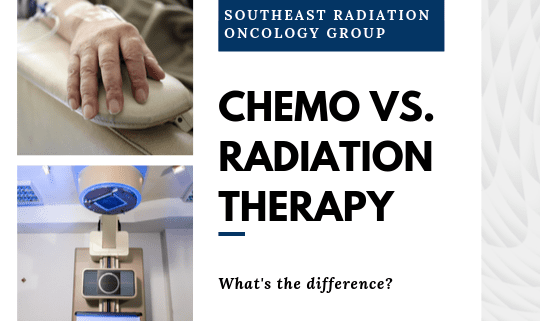 Both chemotherapy and radiation are used to treat cancer, a disease in which abnormal cells divide uncontrollably and can spread to surrounding tissue or elsewhere in the body. But the ways that chemo vs radiation kill cancer cells are different. In this article, we’ll unpack the differences between radiation vs chemotherapy, including:

Both chemotherapy and radiation therapy are used to kill cancer cells, as well as to shrink or slow progression to other areas of the body. The techniques used in chemo vs radiation are different, however.

Chemotherapy (chemo) is a cancer treatment where a patient is given cytotoxic medications systemically, usually by vein, which can travel all over the body. Radiation therapy (radiation) uses ionizing energy, usually in a form an invisible light beam, which targets a tumor or region specifically. Thus, one major difference between these two are that chemotherapy targets the whole body while radiation is more localized. 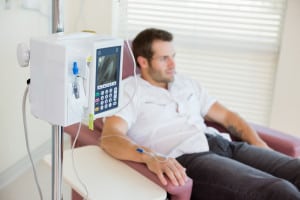 Chemotherapy refers to cytotoxic anti-neoplastic drugs, given intravenously or orally, which travel systemically (throughout the body), which are designed to disrupt cells that are rapidly dividing often by targeting specific points in the replication and division cycle of cells.

Some normal cells also divide rapidly, such as cells in hair follicles or that line the digestive tract. Unfortunately, these cells may also be damaged by certain chemotherapies, which accounts for some of the side effects patients experience when undergoing treatment. 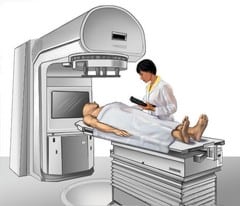 What is Radiation Therapy?

Radiation therapy, also known as radiotherapy, refers to a type of cancer treatment in which ionizing radiation is delivered to cancerous tumors in the body. Radiation acts primarily by disrupting the DNA, either directly or indirectly, which results in impaired cellular division and cell death. Radiotherapy uses creative technology to isolate areas with cancer while attempting to maximally spare adjacent normal structures.

The treatment itself takes seconds to minutes and is usually painless. Treatment-related side effects vary greatly and are limited to the area of the body being treated.

Radiation can be used as a primary cancer treatment or in combination surgery and/or chemotherapy. It can be used preoperatively, in hopes of maximizing the degree of resection, or postoperatively to sterilize residual disease.

Generally, all patients with a diagnosis of cancer should meet with specialist from surgical, medical and radiation oncology to come up with the best and latest treatment recommendations.

Several types of radiation treatment are used to treat cancer. External Beam Radiation is where a beam of ionizing radiation is directed to a portion of the body, usually over several weeks, from a highly specific machine called a linear accelerator. This can be done in very creative ways to try and minimize dose to surrounding normal structures (IMRT). Stereotactic Radiosurgery allows smaller tumors to be ablated with high precision, usually in few fractions or treatments. Brachytherapy, is where radioactive sources are placed inside of or next to tumors either temporarily (HDR) or permanently (LDR).

Is Chemotherapy the same as Radiation Therapy?

Chemo vs Radiation: Side Effects

Both chemotherapy and radiation therapy can damage normal cells in process of trying to kill cancer cells. The type of side effects varies greatly depending on which modality is used.

Side Effects of Chemotherapy

Side effects from chemotherapy can vary greatly and depend upon the type of agent use. Some of the more common side effects to be aware of include:

Side Effects of Radiation Therapy

Hair loss and nausea/vomiting, commonly seen with systemic chemotherapy, are not generally a side effect experience with radiation. These side effects can however be seen if a large portion of the abdomen or the scalp are included in the radiation fields. Radiation side effects depend upon the site being treated, the size of the area receiving radiation, the total dose as well as the presence of prior treatment.

Radiation vs Chemo: Which is Better? Which is Worse?

Various treatment options are available for patients diagnosed with cancer, depending upon the type of cancer, stage and the patient’s overall health at the time of diagnosis. Neither is “better or worse” rather, which is more appropriate and preferable to the patient, depending upon the medical history, cancer type and stage.

Ideally, anyone given a diagnosis of cancer should meet with a multidisciplinary team of specialists including a surgical, medical and radiation oncologist who can present the latest and most effective treatment options for them to consider. Treatment can entail one, both or all three of these modalities, in various order. Infrequently there will be more than one option for successfully eradicating a particular cancer. The patient will be presented the pros and cons of each in order to determine which suits their desires and goals best. By preparing ahead of time, you will have a more active role in guiding your cancer care experience and will be more informed about why you are undergoing each treatment and what you can expect from cancer treatment.

Chemotherapy and Radiation at the Same Time

Every cancer is different depending on the cell type, location, and the genetic mutations that led to the cancer’s development. Often, treatment may require a multi-faceted approach. Attacking the cancer with multiple modalities including radiation, chemotherapy and surgery may provide an improved chance of cure or an improved outcome. Combined therapy can either increase or decrease the risk of side effects, depending upon the type tumor, location and regimens used. Common side effects with combined modality treatment can also include fatigue, digestive issues, skin reaction, hair loss, pain and fatigue.

The decision to use chemotherapy, radiation or both is a complicated one that needs to be made in conjunction with recommendations from the oncology team.

Every day we are becoming more and more aware of how important a healthy diet is not only to overall wellbeing but for cancer prevention, cancer treatment and recovery from therapy.

Do you want to keep your cancer journey organized in a single document you can share with your doctors and nurses? Download our free Cancer Treatment Plan today and be better prepared. 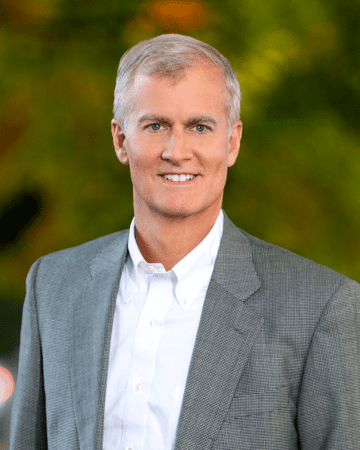 Cancer Support Groups in Charlotte, NC, and the Surrounding Area

How Does Radiation Therapy Work?
Scroll to top