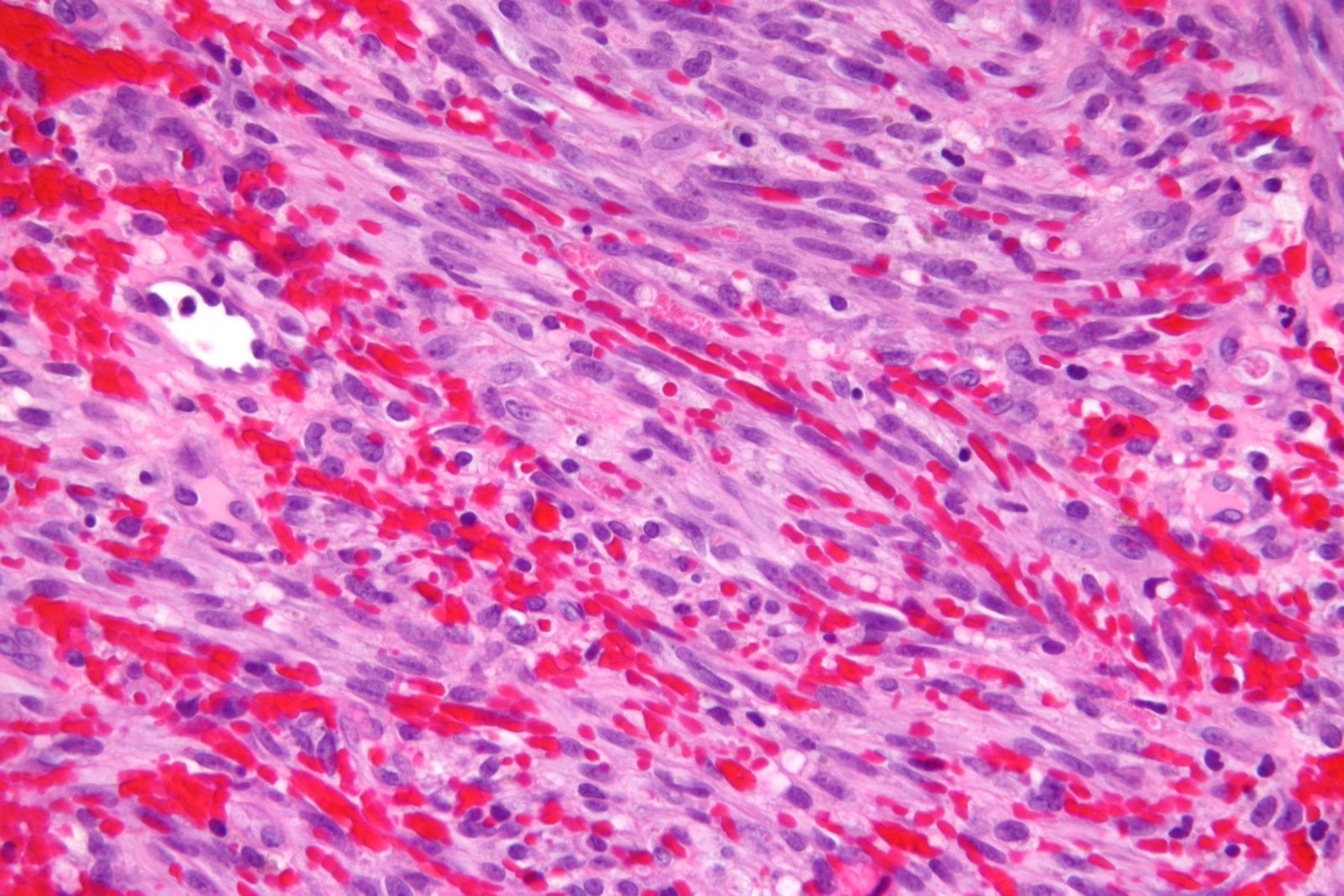 Kaposi sarcoma is just one of many types of sarcoma that can affect individuals. Sarcomas are unusual, but can be a serious concern for both children and adults.

Sarcoma is a rare type of cancer that grows in connective tissues in the body. There are numerous individual sarcoma types, but the two main categories they fall under are osteosarcoma, a type found in the bone, and soft tissue sarcoma.

The American Cancer Society estimates that only around 800 to 900 new cases of osteosarcoma are diagnosed each year, with at least half of those cases in children and teenagers. Approximately 50 percent of soft tissue sarcomas originate in a person’s arm or leg. Symptoms of sarcoma vary person to person, but some include:

Kaposi sarcoma, specifically, affects skin, membranes, and organs, which means it falls under the category of soft tissue sarcoma.

Typically, lifestyle choices can impact cancer risk and prevention, but in the case of osteosarcoma specifically, children and teens have not had enough time to develop any lifestyle risks. There are still some ways to detect osteosarcoma early. Ages 10 to 30 are the primary population who are at the highest risk to develop sarcoma. This is likely linked to rapid bone growth, which has been found to have potential links to cancer. Similarly, children who are tall for their age may be at risk for osteosarcoma because of rapid bone growth.

In children and teens, osteosarcoma is not often preventable. Sarcoma in adults can be prevented through standard cancer prevention practices, such as eating a healthy diet, being consistently active, not smoking and keeping alcohol consumption to a minimum.

The main treatment options for Osteosarcoma are surgery, chemotherapy, and radiation treatment. The type(s) of treatment depend on the stage of the cancer and progression. Chemotherapy is often used prior to surgery, as well as after. Radiation is used less frequently, but is still a viable option for sarcoma treatment, depending on the case.

What is Kaposi Sarcoma? 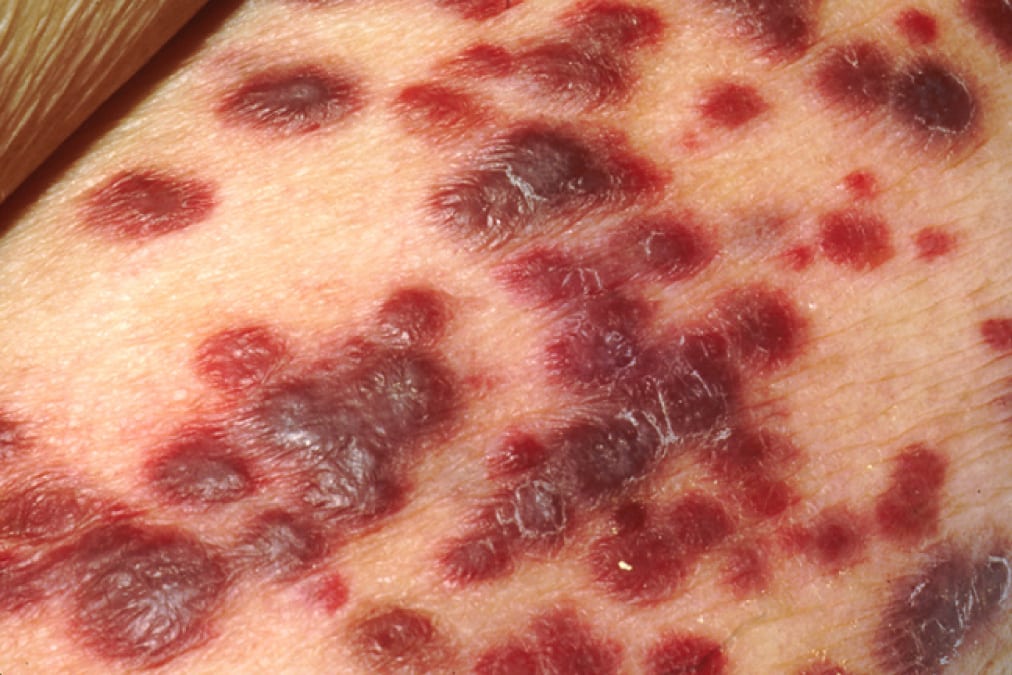 Kaposi sarcoma is rare type of cancer that causes tumors to form in the skin; mucous membranes lining the mouth, nose, and throat; lymph nodes; or other organs. Tumors caused by the disease are usually purple and are made of cancer cells, new blood vessels, red blood cells, and white blood cells. Most cancers begin in one part of the body and spread to others; in the case Kaposi sarcoma, lesions may begin in more than one place in the body at the same time.

There are several types of Kaposi sarcoma:

Doctors use tests that examine the skin, lungs, and GI tract to diagnose the cancer. Once diagnosed, additional tests are performed to determine if cancer has spread to multiple points in the body.

Typically, the prognosis and treatment options for patients with Kaposi sarcoma depends on the type of the disease the patients has, the overall health of the patients, especially as it concerns the immune system, and whether the cancer has just been diagnosed or has been treated and then come back.

Kaposi sarcoma treatment options are similar to treatments for other types of sarcomas. Specific recommendations will vary, determined by the type of Kaposi sarcoma, the overall health of the patient, and whether the disease is being diagnosed for the first time or if it has come back after initial treatments.

There are currently four standard types of treatment for the disease:

Radiation therapy targets cancer cells with high-energy doses of radiation to kill the cells or prevent them from reproducing. Several types of external radiation therapy are commonly used to attack lesions caused by Kaposi sarcoma:

Several types of surgery may be used, including:

Chemotherapy is a cancer treatment that uses drug therapy to target cancer cells in the body. The drugs are designed to kill or damage cells with characteristics similar to cancer cells, while causing as little damage to normal cells as possible. Chemotherapy may be applied to the entire body or to specific regions.

Chemotherapy is given differently to patients with Kaposi sarcoma depending on where the cancerous lesions are located.

Liposomal chemotherapy uses very tiny fat particles, called liposomes, to hold and administer anticancer drugs in the body. Liposomal doxorubicin is used to treat Kaposi sarcoma. The fat particles attached to the lesions in larger numbers that in normal tissue, and slowly release their drug load.

In some cases, the patients immune system may be stimulated to attack cancer cells. Drugs or other substances—some made by the body, some developed in labs—are used to bolster, guide, or reinforce the body’s natural tools to fight disease. Substances made by the body or made in a laboratory are used to boost, direct, or restore the body’s natural defenses against cancer.
In the case of patients with Kaposi sarcoma, a biologic agent called Interferon alfa is used.

New drugs are being developed that target and attack specific types of cancer cells without interacting with normal cells. Two types of targeted treatment are currently under investigation for use in patients with Kaposi sarcoma: monoclonal antibody therapy and tyrosine kinase inhibitors (TKIs).

Doctors can give monoclonal antibodies to patients through an infusion and can be used as a standalone treatment, or as a method to carry drugs, toxins, or radioactive material that also destroys cancer cells.

TKIs, such as imatinib mesylate, are a key component in some cancer treatment drugs. They’re most often used in targeted therapy drugs to actively block the signals tumors need to grow. Research into TKIs is ongoing, including their use in Kaposi sarcoma treatment and treatment for other types of sarcoma.

Clinical Trials for Kaposi Sarcoma and Other Sarcomas

Clinical trials are the main process through which new cancer drugs are developed. As part of the cancer research process, these trials are completed to test the safety and effectiveness of new drugs to determine if they are better than existing treatment options.

What is Kaposi Sarcoma?
Scroll to top